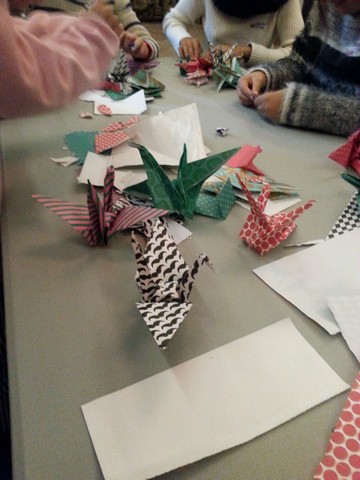 This workshop was hold in the city of Córdoba, Spain, at Palacio de Viana. Here we are learning how to do an Origami crave. We did it to remember the story of Sadako Sasaki,  a young girl who died from radiation from Hiroshima atomic bomb. She believed that if she folded 1,000 paper cranes she would be cured, but she never reached her goal.To this day, people (mostly children) from around the world fold cranes and send them to Hiroshima where they are placed in Hiroshima Peace Memorial Park to commemorate Sadako and the rest of this nuclear attack victims.  That´s why we made as much cranes as we could, to send it to Hiroshima. The kids learned at the same time the ancient art of Origami and to be aware of the consecuenses of some  human being actions.